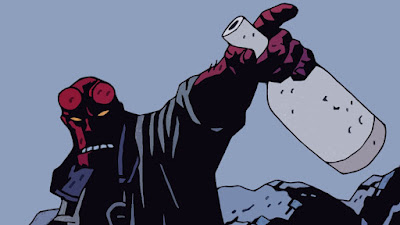 The news just hit last night that we will be getting a new Hellboy movie (Rad!) but it won't be the third in the previous series or have Ron Perlman and Guillermo Del Toro (What!?). Mike Mignola the creator of Hellboy made a post on twitter that said this will be an R-rated movie directed by Neil Marshall and starring David Harbour who is most widely known for playing Hopper in the Netflix hit Stranger Things. This was a bit of a shock since pretty recently Del Toro himself came out and said the third Hellboy movie wasn't happening so we all sort of took that as Hellboy was done altogether. Now the rumor is this will be a reboot which is where they lose me a bit. It is the Spider-man effect for me. You have years of great stories to go to or in the event of Hellboy 2 you can do your own story but a reboot is showing us the same thing we already have. The rumored title is Hellboy: Rise of the Blood Queen so that could be something new but it could also just mean changing the B plot while the majority of the movie is an origin tale.

I'm not ready to write this off as it seems like a good fit with the choice of actor and director but for me Perlman is to Hellboy what Kevin Conroy is to Batman. When I am reading a comic now those are the voices I instinctively hear in my head. Not to mention that the creatures and set design Del Toro adds fit perfectly with a universe like Hellboy's. This is just my gut reaction to the news but I wanted to see what others think. Do you think Hopper will make a good Hellboy and what do you think of it being a reboot? Let us know here, twitter, facebook, or just go yell it in the streets we'll hear you.

While we have some time before we hear some more about all this we can go back and check out Stranger Things season 1 and get ready for season 2. We have all your tee and Funko needs covered so check those out at gachngoigomdatviet.net while you get ready for all that upside down fun!